The Central European Journal of Regional Development and Tourism 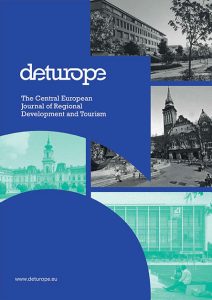 Deturope, The Central European Journal of Regional Development and Tourism

“Our thematic issue gives a brief overview of the territorial disparities and economic processes of Hungary. It is a pleasure for the Guest Editors to introduce the new thematic issue of DETUROPE – The Central European Journal of Tourism and Regional Development. Our publication provides a selection of papers presented at the 19th Annual Meeting of the Hungarian Regional Science Association (HRSA) entitled New forms of territorial disparities and transforming regional policy. The conference was held at the Corvinus University of Budapest on 4-5 November 2021, with 180 participants. There were three plenary sessions, one round table discussion and a total of 23 sessions in three time slots. 140 papers were presented in 19 thematic sessions over the two days. Due to the large number of presentations HRSA offered participants four publication opportunities. In addition to the international journal DETUROPE, three others in Hungarian or English language, in the Hungarian scientific journals Comitatus: önkormányzati szemle (Comitatus: local government review, published by Comitatus Social Research Association since 1991), Észak-magyarországi Stratégiai Füzetek (Strategic Issues of Northern Hungary, published by University of Miskolc), and Tér-Gazdaság-Ember (Space-Economy-Society, published by Széchenyi István University, Győr). The papers were selected in three steps. After the HRSA conference, session chairs were requested to propose the best presentations for publication. In the second round, the submitted English language abstracts were revised by anonymous reviewers. The authors of the best eight proposals were invited to submit a manuscript in the subject of the thematic issue of Deturope. The submitted manuscripts were reviewed by two anonymous reviewers. The accepted articles were revised and corrected according to the provided critical remarks. The current issue is the 8th thematic issue prepared with the cooperation of DETUROPE and HRSA. The members of the Association – as previous or potential authors – hereby express their gratitude to the journal and particularly its Editor-in-chief, Dr. Kamil Pícha. We hope that you will find inspiring ideas, research results or practical achievements in this collection. We wish you a good reading.”

Articles by our researchers:

The first part of the article outlines the unique development path of Central and Eastern European countries after their market economic transition, and its changing geo-economic framework conditions referred to as “externally-driven capitalism” or “dependent market economy”. The failure of regional policy to promote the settlement of new industries and sectors is explained by the fact that most regions in the countries under study belong to the most disadvantaged and lagging regions of the EU. The second part provides a brief summary of the articles included in the thematic issue that focus on the territorial disparities and economic processes of Hungary. The concluding section highlights the specific problems of peripheral regions that are lacking scale and visibility on the European level, stressing the need to construct their own non-metropolitan and non-FDI-driven development model, and to embark on a sustainable/rural alternative development path, one that represents a different perspective of the economy and competitiveness and does not set irrealistic goals.

The role of the foundational economy: The case of two regional centres in Central and Eastern Europe.

Our comparative research examines the changes in the economic position of two rural regional centres, Cluj-Napoca and Pécs, in the post-crisis period. The focus of our interest is the sectoral structure of the local economies in the light of the concept of ‘foundational economy’. Our empirical research covers data from the largest local firms in each of the two cities, as well as regionally aggregated data, analysed from a labour productivity perspective with exploratory statistical methods. The source of our data is the Orbis Europe enterprise database, supplemented by EuroStat data at regional level. Our results suggest that due to the large weight of the foundational economy in both cities, it should be considered an important driver of long-term territorial development and local well-being. There are several sectors in the local economy of the two cities where some activities of the foundational economy excel in productivity, thus we cannot establish a direct contradiction between the high weight of the foundational economy and lower efficiency.

Twenty years of the Hungarian Regional Science Association in numbers

This study is a retrospect on the 20th anniversary of the founding of the Hungarian Regional Science Association. Our aim is to provide a brief but comprehensive overview of these two decades in the light of quantifiable facts and results. We use document analysis and statistical descriptive methods in order to present a compact picture of the history of the Association’s development. The results of our analysis confirm the impression that the Association, after a consistent building process, is characterised by stability, and it offers a wide range of perspectives for professional cooperation between the representatives of regional science.