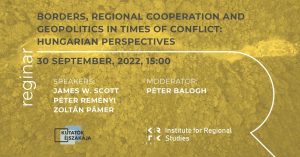 The first session of Reginar is available on the Youtube channel of KRTK RKI.
Four excellent scholars of our Institute, James W. Scott, Péter Balogh, Péter Reményi and Zoltán Pámer talked about borders, regional cooperation and geopolitics
in times of conflict and about Hungarian perspectives.
The event of 30th September was part of the
Kutatók Éjszakája / Researchers’ Night in Hungary program series.

As part of European integration and long-term enlargement perspectives, cross-border and regional cooperation in Central and South-East Europe have been long promoted as a vehicle for improved interstate dialogue, environmental governance and economic development. However, within the present context of military conflict, competing national interests and the promotion of national spheres of influence in Central and South-East Europe (Western Balkans), regional cooperation is increasingly influenced by geopolitical considerations that are often cultural and ethnopolitical in nature. The consequences of these ‘geopoliticisation’ processes are as yet unclear but they reveal, for example, how Hungary has attempted to position itself as a key regional actor. In addition, the new salience of geopolitics leads us to ask questions about the wider ambitions of border studies themselves.
With this webinar the individual speakers will, based on ongoing research, present insights on the challenges facing regional cooperation based on concrete examples of border issues (FI-RU, HU-UA, Western Balkans). We will also discuss the issue of border studies since 24 February: given the present situation and impacts on cross-border cooperation how might borders be studied in future? Can borders be studied the same way as prior to February 24? How might border studies, for example in Finland and Hungary, be impacted?
In the first session of Reginar four excellent scholars, James W. Scott, Péter Balogh, Péter Reményi and Zoltán Pámer talk about borders, regional cooperation and geopolitics in times of conflict and about Hungarian perspectives. The event was part of the Kutatók Éjszakája / Researchers’ Night in Hungary 2022 program series.