On Education
Journal for Research and Debate
no. 11_september 2021 – It centers on the issue of school segregation – with a focus on fundamental ethical, political, and empirical questions.

We investigate the extent of the segregation of Roma students in the Hungarian primary school system and discuss its consequences for actual inter-ethnic relationships within schools. Drawing on results from our previous research, we show that more exposure to members of the other ethnic group (less segregation) leads to more inter-ethnic friendships but also to more inter-ethnic hostility. Importantly, we show that Roma students with above-average academic achievement experience a lot more inter-ethnic friendship relationships than hostility without losing friends from their own ethnic group, and thus the positive effects of more exposure to non-Roma peers far outweighs its negative effects. We conclude that policies that aim at improving the academic performance of Roma students can bring additional benefits by improving their relationships in school. 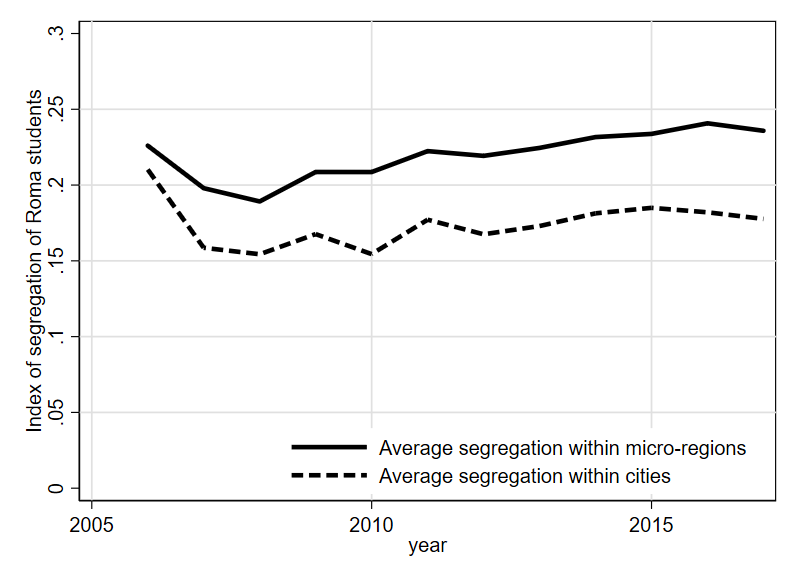 The Roma are the largest and poorest ethnic minority of Europe. Most Roma live in poverty, with low levels of formal employment, low levels of education, and they experience prejudice, exclusion and discrimination sometimes at extreme levels (Bernát et al., 2013; European Union Agency for Fundamental Rights & United Nations Development Programme, 2012; Kende et al., 2020; Simonovits & Kézdi, 2016). About 14 percent of students in Hungarian primary schools (grades one through eight) are Roma. Roma children are substantially more likely to have multiple social disadvantages than their non-Roma peers, which results in significantly lower average test scores by grade 8 (Kertesi & Kézdi, 2011). The distribution of Roma children across Hungarian schools is uneven leading to a moderate but increasing ethnic segregation across schools.