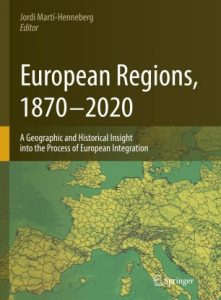 European Regions, 1870 – 2020 :
A Geographic and Historical Insight into the Process of European Integration

With the Austro-Hungarian Compromise of 1867, Hungary became independent in internal political, legal and public administrative system. At the beginning of 1870s, the Hungarian public administration—including the territorial structure—was reformed on a historical basis, but in a liberal spirit. Under the central level, county remained the dominant territorial unit. As a result of the defeat in World War I, the Austro-Hungarian Monarchy disintegrated and Hungary became an independent state in one-third of the former territory. In the following decades, county territorial reform was on the agenda with fundamentally different political goals and values. Despite the radical plans, the territorial division was not reversed, only corrections were made several times, and the political and functional elements changed radically. After the change of regime in 1988–1990, the county remained a territorial framework, but it weakened, and even emptied in terms of local government administration. After 2010, a new period of reform began, in the framework of which a new Constitution, a new local government law, etc., was born. The two branches of the public administration—municipal, state—shifted the emphasis in favour of the state administration, and strong centralisation processes took place.